The sounds on Okrasonic.com were all recorded with fairly lo-fi, inexpensive equipment: This machine was quite an innovation in its day: CD-quality digital recording in your shirt pocket! The downsides of this model were: analog-only output (hence a “lossy” process), no file transfer to computer (you had to play the tracks and record them into the computer in real time). But I had a lot of fun recording with this little gizmo. Moving to a machine that records onto Compact Flash cards instead of removable media offers a few advantages: 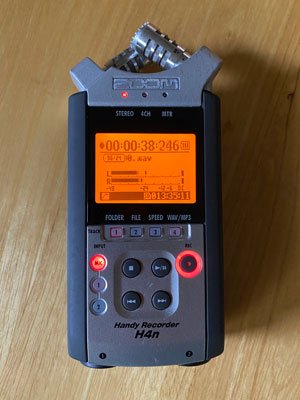 During a long hiatus from recording original content for Okrasonic.com, I acquired a nice upgrade: the Zoom H4n portable digital recorder. This device has a few notable features that distinguish it from my earlier recorders:

Before long, I plan to make some new recordings with the Zoom and upload them to this blog.

For convenience, I have often used a stereo T-microphone for remote recordings: If you’re more adventurous, you could use clip-on omnidirectional electret mics for binaural recordings: Believe me, you will look like a total dork wearing this rig!

Before long I plan to make some new recordings with it and post them on this blog. 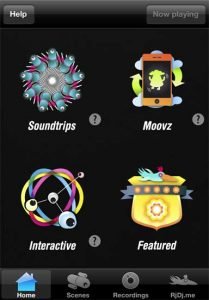 There are plenty of useful and fun audio apps for the iPhone, and RjDj (now sadly gone to the Great App Beyond) was one of the most enjoyable and versatile. The iPhone recorded its surreal sounds with its own built-in microphone.

The videos below will give you a good idea of what RjDj was all about – first, an overview by one of the RjDj crew, and then a lovely little video with audio recorded using the RjDj “scene” called Eargasm:

And, no matter what you use, you want to be sure to protect your gear: Store your gear in a waterproof box when traveling

When you’ve recorded something, you need to bring it into the computer for editing. The method of transferring the recordings into the computer will depend on the recorder you’re using, but nowadays the most common interface is a USB cable for copying the files over.

There are a number of software tools that do a good job with audio. The tool of choice for hobbyists (and even some pros) is Audacity. There are versions for both PC and Mac. You can use Audacity to trim out the boring parts, boost a weak signal, filter out noise (within limits), and do various other enhancements and tricks. 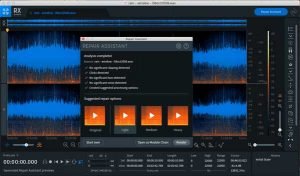 Another popular audio editing and cleanup application is Izotope RX. The basic Elements version goes on sale from time to time and may be well worth the small investment, for all the capabilities it offers. Features in RX Elements include de-hum, de-click, de-clip, de-noise, and a “Repair Assistant” module for easy audio fixes using scripted parameters.

I’ve only used RX Elements a couple of times, so I can’t speak to its utility as compared to Audacity, but I think it will be an important part of the toolkit for future projects.

With just an inexpensive portable recorder and a microphone, you can start making your own recordings! A decent recorder + microphone(s) + storage media can be had for less than $500, probably even less than $300 if you shop around. So what are you waiting for? Join your fellow recording enthusiasts and have fun!